An old essay from a 4chan anon from almost 10 years ago on how consumption drives modern society.  Very interesting to see how some trends they spoke about have continued to develop and in some cases, degenerate over the past years:

How old were you when you realized that unbridled capitalism is cancer?
And no, I don’t mean in a le happy pinko way I mean in the culturally destructive consumerist way. 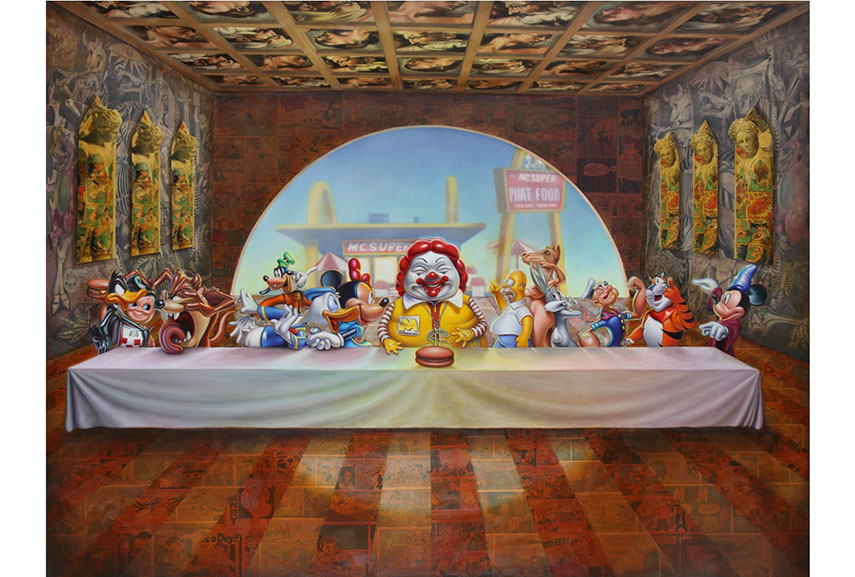 Want to know why western societies moral fabric is crumbling? It’s because your culture has been hijacked into a beast of consumption. Capitalism is like science; it has no moral compass and can be harnessed for good and evil, and right now the western world lets it do both.

Degeneracy? What better way to create profit than by convincing the population that the best way to live is to spend absurd amounts of money on fleeting frivolous nonsense like alcohol, tattoos, fashion and clubbing. Obscenity and hedonistic sex attracts attention and sells better than modesty and virtue. Why settle down with a family and conserve your wealth when you could be out partying! Don’t worry about the population decline, we’ll solve that with…

Multi-culturalism. Capitalism doesn’t care about who its consumers are and prefers to inflate its population at all costs in order to drive up consumption. The national unity is consumption, not spirituality, ethnicity, philosophy or any common humanist goal, just buy stuff.

Crime. With the prison industrial complex soaring and profiting it is easier and more cost effective to just lock people up instead of trying to correct societal ills or quell the toxic cultures that contribute to crime especially when those cultures contribute so well to frivolous consumption.

Welfare class. It should be clear by now that welfare isn’t based on necessity but funneling money into the dumber population who spend money on frivolities and drive up consumption. The money is better in their hands than it is in responsible families because it moves faster. This is made easier with a population of lower class minorities.

Feminism. It is well known that women spend more money than men, so why do you think the current system is set up to funnel money into their hands? Why do you think the culture portrays white men as bumbling fools? Because they don’t spend money recklessly enough. Once you realize that this culture favors reckless spending you will realize why the culture war looks the way it does. Same goes for black men; they spend money more recklessly, that is why they are put on a pedestal.

Trivial politics. Most political movements are monetized and only exist to drive consumption. Slacktivism is the art of drumming up attention but providing no solution. Sell some bumper stickers, rainbow flags, wristbands and support groups but be sure not to solve the issue because then the money supply ceases. Identity politics is the same nonsense and is geared towards the same goal; funneling money away from white men and into hands that spend money recklessly. Pop politics are about trivial shit like gay marriage, abortion and phantom racism in order to draw attention away from real issues that would disrupt the system. Stupefied comedy shows are the most popular avenues of political consumption. Marxism is set up perfectly to seduce minds and sell the cause but be just ridiculous enough to never pose any real threat to the status quo.

Want to know the real reason why the third position is feared?

Because it is the authentic antithesis to this nonsense.

A lot of the points listed above have simply grown over the years.  There are, however, some interesting new developments as well.  The above essay describes white men as not spending recklessly enough, but over time a significant subset of infantile white men have emerged from the newer generation.  These tend to act like children in adult bodies and freely overspend on their hobbies and other frivolous pursuits, and are probably the result of our consumption culture’s push for an ever bigger market base.

Similarly, the popularization and attention given to transgender people, a heretofore relatively unknown minority, over the past years appear to also have benefited unbridled capitalism/consumption.  Transgender people require expensive surgeries to complete their transition, and would also stay on hormone treatments for the rest of their lives, assuring a continued stream of profit to the medical and pharmaceutical industries.  The fact that big pharmaceutical corporations have already started seeing the transition process with the cold calculating eyes of a profit seeking machine is disheartening.

It seems overall, as the beast of consumption continues its march, no group of people will truly be safe from its influence as it grubs and sniffs for ever more profit.