A 4chan anon explains the modern phenomenon of single young men who does not bother to seek out sex/marriage in the lens of an old Sumerian myth, and how society views them:

It’s called the Enkidu gambit, and this is why incel has become the insult du jour of the present social mainstream. Women – and sex – are the most fundamental method to harness the profound energies of men and use it to benefit society.

In the myth of Gilgamesh, Enkidu was a wild and untamed man (quite possibly one of the last neanderthals) with tremendous strength and primal power. He was so in tune with nature that he could even speak with animals, nor would they flee from him. But he was a nuisance to Sumeria. So Gilgamesh, the ruler, sent out a temple prostitute to seduce and sleep with Enkidu.

Enkidu spent seven days with this prostitute having sex. Once he was finished, he found he could no longer understand animals. Not only that, but they fled from his sight. He had no choice, but to join and become part of civilization.

This plotline appears in virtually all works aimed at women. The idea of a woman domesticating a wild, untameable man is deeply appealing to women. And that is the primary reason why incels arouse such fear and antipathy, because their existence arouses the primal anxiety of society/women. Enkidu might very well be just off doing his own thing. But society will invariably interpret his existence as dangerous because it is so unpredictable, because a man not part of society is a man out largely for himself.

This explains why so many people are surprised, even anxious, if you say you have no partner or don’t have sex. The idea that this is a profoundly unnatural state isn’t held up by nature – a significant proportion or even the majority of men do not reproduce throughout history. But it is related to their own domestication by society, to the point where they start unknowingly adopting its own morality (meant to benefit itself) as their own. Women are far more likely to feel such anxiety, because they intrinsically realize that society will always exist to benefit them. To protect them from rape or violence. To help raise and guard their offspring.

Both halves of society thus feel deeply apprehensive towards those who aren’t having sex because they recognize this fundamental reality: those who don’t form relationships and therefore lack a sex life are almost entirely disconnected from society. As disconnected as a wild Enkidu living in the wilderness. An unpredictable variable, and unpredictable variables are invariably threatening to normalfags and especially women, who have much more to fear from societal breakdown or dissidence. For a woman, the best state of society is peaceful, predictable, and ordered. It can be exciting and dangerous, but only to a point. It is fun to dance with a guy who’s been in prison several times, but she doesn’t want to get raped or murdered.

This explains both 1) the refugee crisis and 2) the push to revoke the 2nd amendment. Collectively, we have seen an entire generation refuse to take the Enkidu gambit. Collectively, we are now seeing a response. Much of it is unconscious, but make no mistake: you single men are the principal enemies of the left and society at this moment. Not the rapists, not the CEOs, not even Donald Trump. They hate Trump because they saw his victory as validating you, and that frightened and provoked them at a deep, deep level. If you won’t sacrifice yourself for society, if you won’t submit to the mainstream and conform to it, you WILL be replaced. And that is presently the primary goal and motivation of the left in the west today.

Believe me or not, but look at how many antifa were trying to get you into the streets back in May. Watch the interviews and videos from those out in the streets. Almost all of them were challenging “nazis” to come out in the streets and fight them. This entire protest was launched due to how much you’ve both enraged and frightened them. They can’t control you, and like all control freaks they find this prospect psychologically unnerving. Hence they’ve decided, quite simply, to kill you.

Even though the insult “incel” that’s toss around refers to a man who is single through no choice of his own (“involuntary celibate”), I’ve noticed an increasing number of young men in society who choose to be single of their own accord.  Indeed, mainstream society seem to be uncomfortable around the idea of young men who are unwilling to work hard and sacrifice themselves for the greater good.

To go off on a tangent, as a well off man who’s chosen to be single, I can’t help but notice the definition of “the greater good” have been quietly changed and subverted over the years.  For my immigrant parents back in their home country, “the greater good” was a society where their children can grow up happy, and where they can also enjoy the fruits of their own labor along the way.  This was true for America once upon a time as well, but nowadays “the greater good” in the US has somehow turned into a society/government that endlessly pay toward unsavory foreign interests and an ever more ravenous welfare class at the expense of those who are still productive.

Even dumb men can manage to do a rough cost-benefit analysis in their own heads on the matter of marriage, work (which is growing increasingly exploitative as well) and what they get out of it all.  In this day age, the juice is simply not worth the squeeze.  The growing number of single men with no women nor children attests to this. 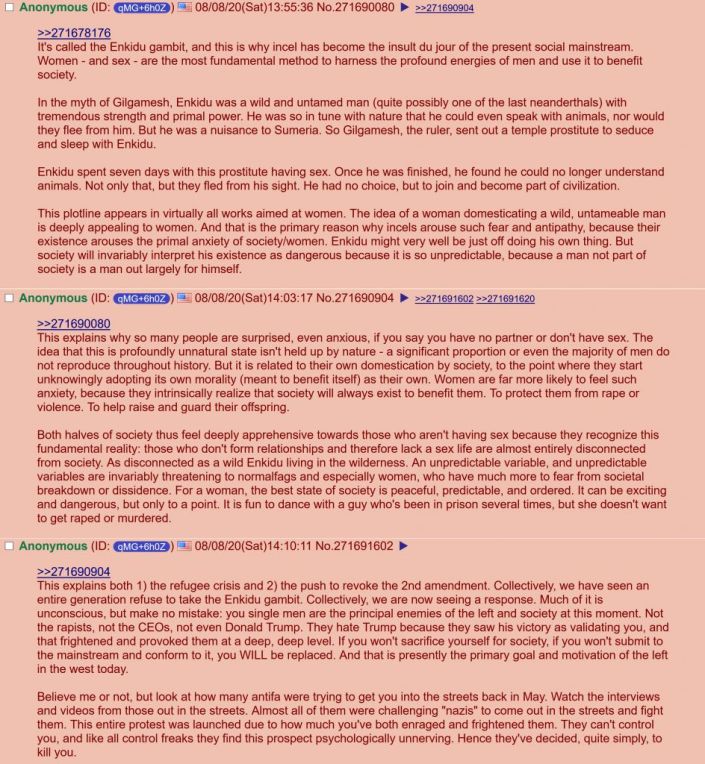