This is a curious little meme comic that has been circulating a lot on 4chan in the light of the recent attack on Ukraine from Russia:

There’s multiple different versions of this comic, from one without any flag, to one with a modified flag of the USA.  The versions of the different flags present very different nuances on the message of the comic itself, but what they all share in common is their angry refusal to fight against Russia (literally, as in the sense of going to war against, as well as figuratively, in the sense of opposing their actions in general).  On the other hand, the most outspoken opponents against Russia in the US as of this time appears to be the mainstream media and curiously, the far left.

In the past, when Russia acted militarily (Crimea, Georgia, etc), most of the typical Americans online reacted with apathy.  Why is it so different this time around?

One anon from 4chan posted what was probably meant to be a trolling topic on the political board, stating:

“At the end of the day, all of us Americans need to stand together.  You guys aren’t helping and need to get on board.”

along with a picture of a tweet from George Takei with a similar, if not slightly condescending, message of:

“I shouldn’t have to say this, but this is the kind of moment where we should all come together and stand behind our president in the face of great evil.”

An explosion of responses followed.  They do a decent job of demonstrating why a significant portion of the American population are vehemently against fighting Russia, as well as some of the bigger issues plaguing our own nation.  Here are a few of the more coherent responses, emotional as they may be:

The people who want me to go to war against Russia are the same people who do all this to me.

I think those people are my real problem, not Russians.

Very, very angry.  But also makes it very clear why they don’t care much about Russia, but very much dislike the far left, SJW types that are now pushing against the Russians.

>Uhhhh whiteguys we need you

Racial tension stirred up by the recent events from the past couple of years seem to play a role in the distrust toward the same group of people now trying to protest against the Russians.

This. My country didn’t want me before, it is not my country. My country, the ones my ancestors settled, pioneered, and built for my benefit was given away to foreign invaders over the last half century. Everything I was meant to inherit was stolen and usurped, and my whole life I have been accused of being a tyrant while in reality I am the one who has been stolen from and lorded over. I have been openly mocked and ridiculed. Fuck all of them, may they burn alive in their own dumpster fire and choke on the fumes of the poison they used to kill my country as it burns. God have mercy on their souls if, in the middle of the chaos, they look up from the ruins of their fallen balcony and see me.

A more elaborate explanation how racial tension plays a role toward the distrust that this person have toward the people clamoring for war against Russia.

>At the end of the day, all of us Americans need to stand together. You guys aren’t helping and need to get on board.
I WANT TO BE CLEAR …
this is what they’re going to say when vax deaths are so great that they cannot be ignored. It’s going to be, “Look what’s done is done, and now we need to stop blaming people, and come together and move forward.” They did this with the sub-prime mortgage fiasco, they’re trying to do it now, and they will do it with covid.

CALL THEM ON THEIR BULLSHIT

Distrust and anger toward the last couple of years worth of virus scare in the media and vaccines with increasing reports of nasty side effects, often pushed at the threat of loss of employment, also play a role.

One of the most interesting unintended consequences of this debacle is seeing your position go mainstream.

The overwhelming sentiment I see among white men is, no Russian ever called me a racist, sexist, misogynistic homophobe and held me responsible for the wrongdoings of my ancestors.

The realities of globalism are setting in faster than ever before, and people are beginning to realize the American nation has been usurped by the internationalist managerial state, albeit at the 11th hour.

This one was posted in response to one of the quoted posts above.  More clarification on just why a lot of people don’t seem to care too much about Russians, but what is happening right at home.

>You are everything that’s wrong and evil about the world
>We will replace you, your stock will disappear, and there’s nothing you can do about it
>Guys I was only kidding, let’s come together to fight evil!!
na

You stole my political, social, economic, spiritual and cultural power. You’ve unpersoned me for the color of my skin and for my sexuality. You’ve attacked me, belittled me, censored me and taught me and our children to hate ourselves, and have gaslit us that we’re the problem. Yeah i’m abandoning you in your moment of “crisis” for a war that does not serve me or my interests, but remember, you abandoned me first. My enemy isn’t in eastern europe, my enemy is in my own country. They march the streets and burn down buildings while claiming victimhood. They prattle on television about how they’re being oppressed in between ad breaks representing them disproportionally. WE. WIll. NEVER. FORGET.

More references to racial issues, and specifically, the BLM protests/riots from the last few years.

I’ve never observed this level of divide and vitriol among Americans on a foreign issue/war that we’re not even directly involved in in my adult life.  Just like how curses tend to come home to roost, a lot of the negative issues the SJWs types and mainstream media has brewed up over the past decade are also coming back to haunt us.

The numerous angry responses I’ve observed online from people who refuse to follow the political left’s rally against Russia is a litmus test of worse issues lurking within our own society. 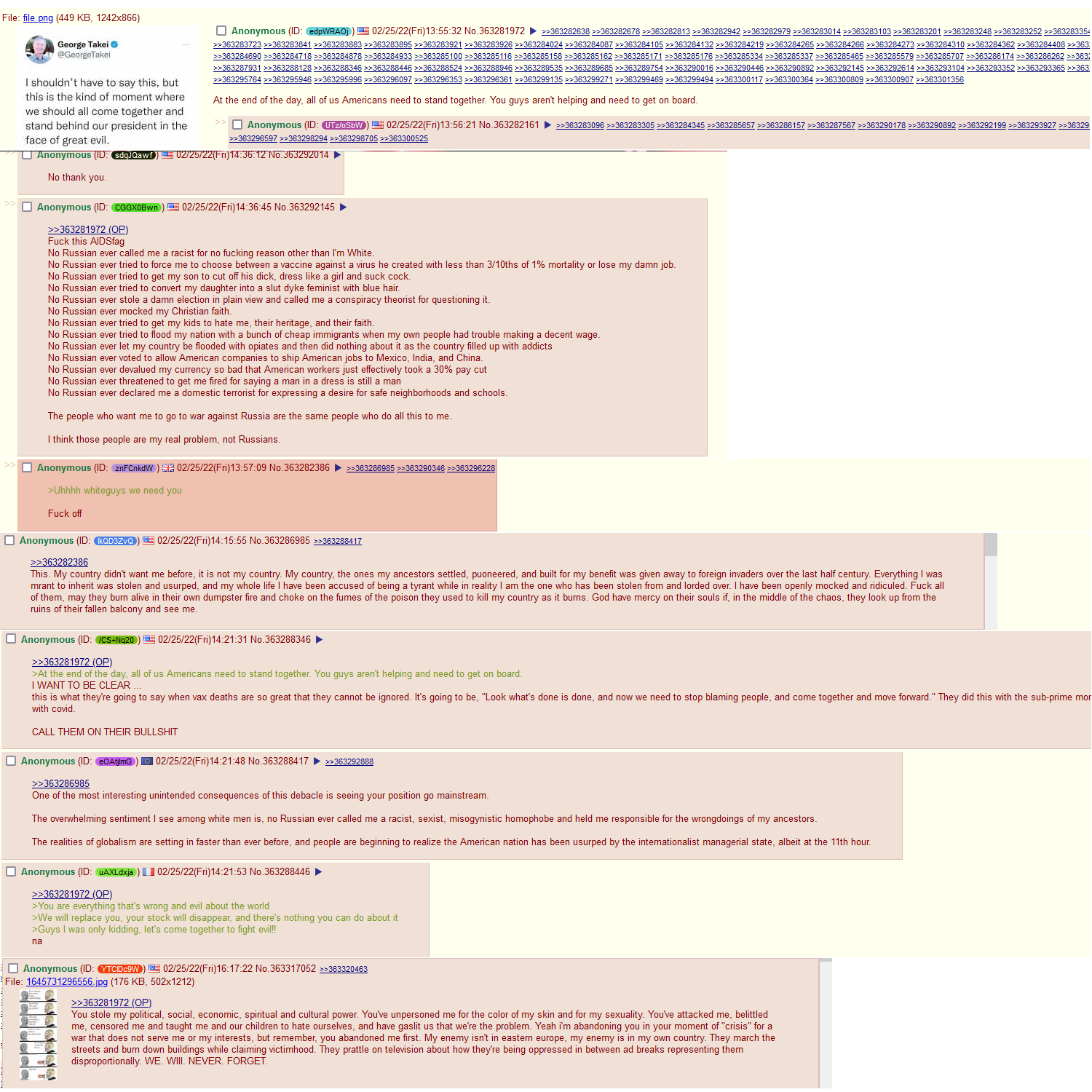