This is an essay from Beaver on a topic that’s very relevant to the times we live in.  There’s an increasing number of echo chambers online and in real life, and anyone who’s observant can see their influence on how polarized the US and the world in general have become:

The last two decades have seen an astounding rise in extremism everywhere in the world, including in supposedly first world nations. Not coincidentally, these decades match with the rise of the world wide web. This is because the internet has allowed the proliferation of a phenomenon which has become known as “echo chambers”. 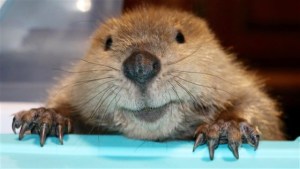 Echo chambers are a threat to the advancement of mankind through the intellectual isolation they promote. They prevent the exchange of ideas and ultimately allow tyrants to control the masses through careful cloaking of thought currents. They breed intolerance and ignorance. They are the death of the human spirit.

But what is an echo chamber? To understand what it is. one must examine how they are formed.

In real life, individuals must interact with one another in order for society to function. These individuals will sometimes get along, sometimes not. However, even when they get along, there are always slight differences, slight disagreements. This is easily overcome with a bit of tolerance; one can easily accept that other people will think differently, have different opinions, have different values, even if only slightly. So, despite their differences, individuals will learn to not only work together, but become friends.

On the internet things are different. You are separated from those you interact with. You can choose who you talk to and if someone bothers you, you can ignore them with the click of a button. Unlike real life, you’re not stuck with the people around you. There are billions of people on the internet and you can pick who you want to talk to. As people are no longer forced to deal with other people’s differences, they simply don’t. As they don’t deal with different people, they do not grow a tolerance to dealing with different people. And as internet communities are built, this means people who do not agree with the community’s “mainstream opinion” are immediately considered undesirable and removed by community managers. Ultimately, this means the people in these communities only interact with people who think exactly like them. And as this happens, their fallacious beliefs and aberrant behaviors do not get challenged and so they become more and more extreme.

This is where the term echo chamber comes from. Members of these communities do not go there to have an actual social interaction; they go there to have their beliefs repeated to them and validated. It’s a form of self-gratification, and one which is dangerous to human civilization.

For you see, the effect of these echo chambers is not limited to the internet. As more and more of people’s social interactions take place on the internet, the effect becomes more pronounced. A man who does not tolerate dissent on the internet is unlikely to tolerate it in real life too. Though more inclined to keep their minds to themselves in real life because of the fear of retaliation (or worse, a challenge to their ideas), their opinions of the people surrounding them still suffers. Someone who used to be that friendly coworker who has an annoying habit of squeaking his chair is suddenly that unbearable asshole you can’t wait to get away from when your shift ends. The nice girl who votes republican is suddenly a brainwashed neo-con. The coworker who takes breaks to get a smoke twice a day is suddenly your worst enemy.

And as this intolerance builds, so does extremism. Those with a different opinion are no longer merely different, they’re enemies. And those who even dare to suggest that you might be wrong must be removed.

In turn, this leads to a great reduction of the spread of ideas. As people are no longer capable of dealing with differing mindsets, trying to instill ideas in them becomes more and more difficult. This is a terrible thing in any friend of humanity, as it means a regression, a loss. It means the impossibility of teaching others about different ideas as they refuse to even consider them.

Yet to tyrants, this is a dream come true. In fact, for most of history and in most of the world, including the 20th and 21st century western nations, those who would seek to dominate have used this to keep control over their population. By misinforming them, by keeping important ideas out of their reach, by limiting their ability to connect with others, they created echo chambers. Certainly not as exclusive and extremist as those we see on the internet, yet still very influential. Influential enough that those who differed from the norm would be exiled, imprisoned or executed.

Logically, the internet, through its ability to connect people, should have removed this weapon from the arsenal of the mighty. Yet, as explained, and against all odds, it has actually made it even more efficient, even better.

But how do we fight this? How do we stop this nonsense? How do we disarm this weapon? The answer itself is discouraging: It is almost impossible to do. People are naturally inclined to seek echo chambers, to seek people who validate them. In fact, those who seek conflict, even simple in the form of discussion, of opinions, are seen as mentally unstable. Yet there are ways to mitigate it.

First and foremost, free speech. Any attack on legitimate free speech must be seen as an attempt to build or strengthen an echo chamber. Whether through hate speech laws, the banning of books, movies and websites or through simple terrorism, those who attack free speech seek to silence opposing voices and prevent the flow of ideas. These people must be fought tooth and nail.

Third, simply speaking out. Speak your opinions. Spread them. Do not hide them. Force people to hear them. The more people do this, the more opinions people will be exposed to and the less effective echo chambers become. Though this may be dangerous, the internet allows you to do this fairly anonymously if you want to. 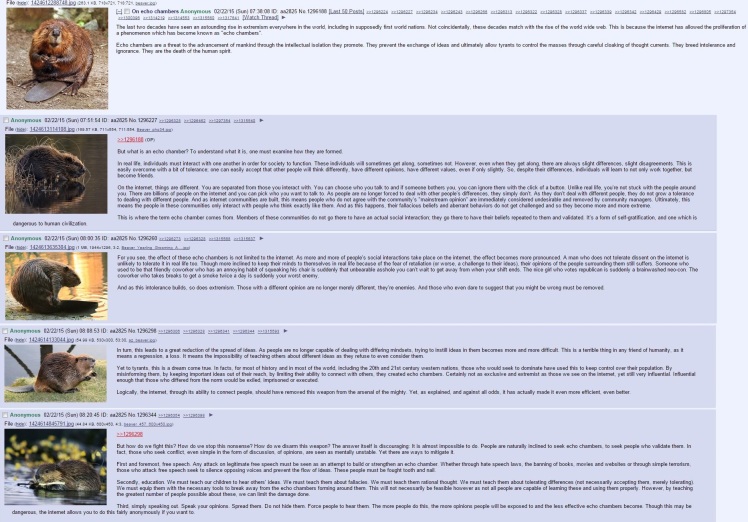