“Justice is the great legitimizer: It is what distinguishes a true leader from a tyrant.”

This is another essay by Beaver, this time on the topic of justice.

Any society, no matter how ideal, will have its share of dysfunctional individuals. These people will seek to further their own ends, their own power, at the expense of others and ultimately at the expense of the nation. If left to their own devices, they will cause the fall of any nation. 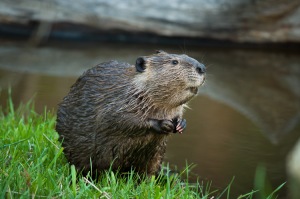 Thus, let us examine the topic of justice. Why is justice important? What should be considered a crime? And what kind of punishment is appropriate? This will be important in the times to come as governing bodies and law enforcement agencies become less and less interested in actually defending justice and more interested in defending their own powers.

Why is justice important?

For a society and thus a nation to function, the individuals comprising it must agree upon a set of rules, which we call laws. Ideally, the goal of these laws should be to facilitate and protect society by prohibiting activities harmful to it. Going against those rules would then be harming society; though the legitimacy of certain laws in current nations is debatable, remember that we are talking about an ideal scenario for the sake of argument. Now, imagine a criminal, as in someone who works against the greater good, usually for personal gain. Instead of examining why he must be opposed, it is better to understand what would happen if he is not opposed.

So, we have our criminal, doing dastardly deeds. He lies, he steals, he rapes, he murders. Now, of course, the first consequence of this is that it harms society. He is harming people and if society does not work to protect its members from harm, then it is not achieving its goals. However, being left to his own devices, his effect on society is outright perverse. First of all, many will see that there is no consequence to his actions. And seeing that society apparently does not benefit them, these other individuals will become disillusioned with the idea of the society itself, therefore causing them to also begin working for personal gain. Worse, the dysfunctional individual will often abuse people’s good will to obtain what he needs, discouraging cooperation between these people, sowing distrust. Eventually, without the enforcement of laws, all the individuals stop trying to make the society function and simply try to take everything for themselves, causing national collapse.

To a wise leader, there are also great benefits to being just.

As discussed before, power only lays where men believe it lies. Power can be obtained through many ways, from faith to blackmail to violence to love to respect. And in the proper administration of justice, a leader gains a tremendous amount of love and respect and thus power. A just leader needs not use violence or fear to retain his power.

So, we can determine two tenets:

2. A proper administration of justice empowers the leaders of a nation.

So, the question arises: How can justice be properly administered?

To answer this, we must first understand what a crime is.

To begin, let us all agree that a crime is harmful. To what, or whom? It matters little. But it has to be harmful to someone or something. There is no such thing as a victimless crime and thus any attempt at turning an activity which does no harm into a crime has no legitimacy. Note however that the harm of the crime needs not be direct: Certain actions are very harmful to society, yet their impact when accomplished by a single individual will be almost invisible.

Second of all, we have to agree that it causes more harm than good. Any man pricking children with needles would be accused of child abuse, yet we fully understand the virtue in the medical act of vaccination. This means that any action must be put in context before being judged, so as to evaluate whether it was truly a crime.

Finally, the perpetrator needs to have a degree of consciousness about his actions. This is why we do not punish children or the mentally ill as harshly. An accident and a willful action are two different things.

So, we can say a crime is an action which causes harm, does not cause more good than harm and which was done willfully. Once this is understood, how do we enforce laws, as in, how do we actually have justice?

The answer is simple: Prevention and punishment. Prevention aims at reducing criminality while punishment seeks to stop its harmful impact. Prevention is a fairly complex issue which I do not feel qualified to speak about, yet let us say that there are many factors involved, including good socioeconomic conditions, proper education and a strong yet just law enforcement. What I find more interesting to discuss is punishment, as I feel it is nowadays far too often done wrong.

As said before, all crimes must be punished. It is essential to protect the well-being of a society. If the government or law enforcement refuse to punish crimes, then it actually becomes necessary to engage in the unsavory practice of vigilantism. This is undesirable for many reasons, including the lack of experience of the general population in dealing with crime and its punishment. Yet, if justice is not served, then honest citizens are left with no choice but to take it into their own hands. It is thus vital for law enforcement and the government to make sure that they enforce law properly.

But what should be the aim when punishing? How harshly should people be punished? How is this determined?

The aim, when punishing, is to make sure the punishment feels like the crime was not worth committing. It is as simple as that. This is why big crimes should receive worse punishments. However, let us look at it from a pragmatic standpoint: We have individuals here, dysfunctional yet still capable. The aim here should be to salvage them. So, while punishing the criminal, at the same time he should be evaluated and those capable of rehabilitation should be given the chance. This does not mean that their punishment should be any less harsh, but merely that we should make sure that they do not turn to crime again once their sentence has been served. Likewise, any individual evaluated as having no potential for rehabilitation should likely never leave jail, and maybe even be executed. Though I am personally against the death sentence for reasons I don’t want to discuss here, my practical mind sees no reason to release someone whose first goal after their punishment is done will be to cause more harm, and I see no reason for the nation to have to maintain their continued existence. At best, they should be put to forced labor.

But how do we know how harshly someone should be punished? To know, we simply go back to the definition of a crime. How harmful were the actions? And was the person aware of what they were doing? An accidental action which caused little harm should carry little or no punishment. A planned action which causes great and irreparable harm should carry the harshest punishment. The degree of harm should always be judged according to how many individuals were harmed and in what way, while the degree of responsibility should be judged according to the accused’s degree of consciousness and intentions.

So, we now understand that justice is important as it prevents the collapse of society and empowers its leaders. We know that a crime is a willful and harmful action which causes more harm than good. And we now understand that punishment should be tailored according to the degree of harm done and the criminal’s degree of responsibility and that we should still aim to salvage criminals through either rehabilitation or forced labor. 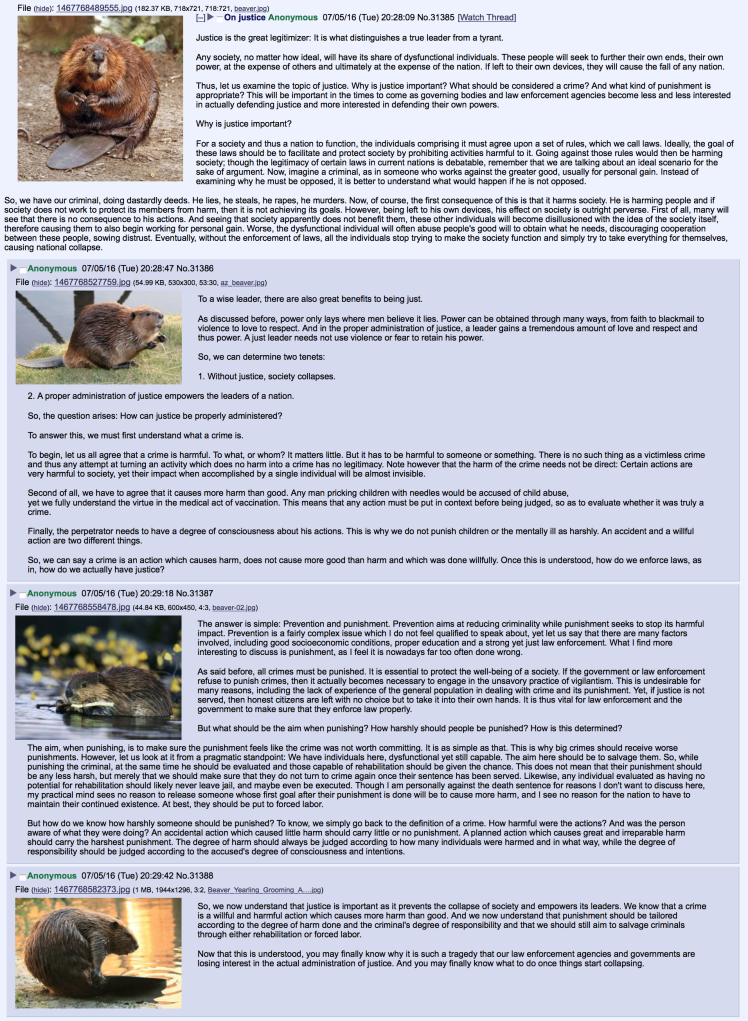