“Rights are not protected by law, but by the citizen’s willingness to use violence against the authorities when they are not respected.” 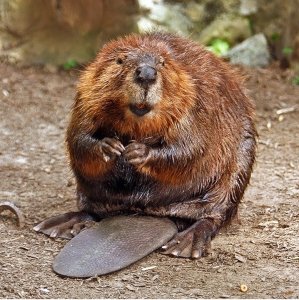 Before I go further, let me first explain what these Beaver transcripts are.  They are a series of essays on various political and social topics posted on 4chan and other similar communities by a person who always posted pictures of beavers along with his posts.  They are very insightful even if you may not agree with everything he says.  As of now each essay is saved in individual screen caps and are posted around online randomly, sometimes in incomplete fragments.  It’s my intention to have as much of them here as possible for preservation, and also to have them in easier to read formats along with the original screen caps for reference.  I’ll post more of these in the future.

Without further delay, here’s the rest of Beaver’s essay on the matter of one’s rights.

We often talk about rights. In fact, George Carlin had his own routine concerning rights, where he questioned the legitimacy of rights as an idea and eventually came to the conclusion that either you have all rights, or you have no rights at all. His explanation was mostly aimed at being humorous, but I think it is important to examine what rights are and why we have them, or rather why a government would feel inclined to let us have them. I propose the following answers:

2. The reason a government would rather let its citizens have rights is to avoid violent conﬂict. Violence is undesirable because of the inevitable destruction it brings and so by knowing what the government is not allowed to do unless it wants to face a violent uprising from its citizens, violence can be averted. They are essentially a way to have “civil discourse” if you will.

Let us examine the ﬁrst answer I give, namely that rights are what citizens are entitled to as long as they follow the law, and that laws are designed around rights, not the other way around.

First of all, a citizen who follows the law should expect his rights to be respected. And even if there is an accusation against him, certain rights also protect him in that they allow him to have a proper defense and the such. Without rights, citizens would essentially be constantly at the mercy of their government. They would have no ofﬁcial power to oppose the authority in any way.

However, as long as they have rights and they are respected, then the citizens are capable of defending themselves against potentially abusive authorities.

Likewise, this is why it is not laws which should determine what rights you possess, but rather the rights you have which should determine what laws can be created. If laws can change rights, then the government can decide which rights you have and they are essentially meaningless. On the other hand, if laws must be designed around predetermined rights, then the government does not have the power to create laws which violate your rights.

Yet all this is meaningless unless the citizenship is willing to enforce its rights.

So we reach the most important point I am making here, which is the necessity of the citizenship‘s willingness to engage in violence if the government denies its rights.

You see, one must ask himself what forces the government to respect rights in the first place. If they ignore them, if they trample them. what ill will befall them? Who will stop them? The answer here is simple: The citizenship must stop them, and the only means by which they can achieve it is through violence. Some foolish souls may claim that merely electing a new government will change things, but voting is in itself a right and if a government is willing to remove one right, it will not hesitate to remove another. And if one party does not suffer dire consequences for attacking the rights of the citizenship, then the other parties have no incentive to restore those rights. Thus, paradoxically, it is violence which gives rise to rights. And rights arise and are respected in order to
avoid violence.

Governments themselves have an incentive to respect rights. As said, violence is destructive and it is far more efficient to arrive at a peaceful solution, which involves respecting the rights of the citizenship. Though it could ignore said rights, this would be at an undesirable cost.

Or rather, it should be, which brings me to my ultimate point.

This is why everything is going wrong with the west right now. This is the root cause of all the issues which we are faced with: Governments are not respecting their citizens’ rights, yet these citizens are unwilling to use violence to defend themselves. Rather, they sit back and grumble quietly, telling themselves that it’s preferable to lose those rights than to engage in violence.

It is unacceptable for any man who believes that he has any rights to allow these abuses to take place. Though it is important to make sure that rights have been violated before taking action so as to make sure one is righteous, once it is truly determined that a citizen’s rights are not being respected, it is the duty of all to rise up and oppose their government. Those who sit down and begrudgingly accept these repeated outrages are no better than slaves and deserve no better fate than slaves.

And so, remember this, and plan accordingly. Once your government thinks they can take away your rights, it is time to hold on to them as tight as possible with one hand while thrusting your spear with the other. Otherwise, you are nothing but a slave and deserve to be treated as such.