A self proclaimed social justice warrior posted on 4chan a while ago, demanding to know why his kind is disliked.  A anonymous gentleman rose up and gave a spectacular response.  The conversation is as follows.

Bullshit.  You have no quantifiable metrics for injustice, so you have no victory conditions (for a very simplified example, when blacks hold X% of all engineering jobs and are only Y% of all prisoners, racism is ended).  That would be fine by itself, but you believe in fighting injustice with injustice (gays have historically been denied gay marriage?  let’s get random CEOs fired for opinions they held six years ago).  You don’t seek converts, you seek to punish and bully – straight white males who disagree with you must be purged and publicly humiliated.  Even the jihadists will spare you if you convert; no apology or future correction will satisfy a SJW.

I could forgive that too if you weren’t all hypocrites and liars.  Your treatment of women and minority dissenters is appalling; if they don’t want you acting on their behalf, that’s their choice, not “internalized patriarchy” or whatever.  You rob them of moral agency.  When called out for these behaviors (as you always insist on calling out others), you lie.  You strawman your opponents (criticized a woman?  misogynist!), you group them with the worst (you’re a gamer?  you’re as bad as the anonymous rape threateners!) and when confronted with your own flaws, you restate them less threateningly (motte and bailey argument).  You phrase all arguments as kafkatraps (disagreeing with your assertion that we are evil is taken as proof that we’re evil).  You publish manipulated and misleading statistics, then lambast anyone who questions them.

You insist on vigilante justice against random acts of the week for your two-minutes hate.  Why is it the NFL’s business to punish domestic violence?  And, if it is their business, why isn’t Hope Solo receiving the same attention from your side?

Then you claim to be arguing for equality, but you’ve taken the idea of racism (hatred based on skin color is bad) and replaced it with a new concept where only one race can be guilty of racism.  You excuse racial prejudice and hatred based on what I’ve explained are arbitrary, unmeasured states of being.  Your solution for the unequal treatment of whites and blacks is to hold whites to a higher standard.  Your side lobbied the FBI to redefine rape so more women victims would be counted, but also so that “made to penetrate” does not count, leaving male victims in the cold.  Because male privilege, apparently.

Historically ignorant SJWs think whites hold collective guilt for the awful things our ancestors have done.  But they don’t care about the unspeakable atrocities by other races.  The only difference between whites and others was that whites had the social and technological prowess to do evil efficiently; Africans, Asians, Indians and everyone else practiced genocide and slavery, they were just less adept at doing it right.  Given the means, they would have done the same.  But nope, only whites are guilty; Arab oppression of blacks and caucasians never happened, not to us, nope.

I’ve been lucky enough to grow up in America, so this shit is new to me.  But I’m descended from puritans, and I know my history; I know how they treated dissent.  I also know how commies treated dissent; I grew up next door to a grizzled old Russian who barely avoided the gulag by smuggling himself out of the country.  I know what you petty tyrants have turned into every time you gained enough power.

Worst of all, you turn the very principles of freedom against us.  We tolerate you because we believe in free speech and civil discourse, not bullying and violence.  But that means we have to watch you advocate against that very freedom.  We don’t believe in ruining a stranger’s professional life over an opinion, but that means we can’t punish your actions.

We believe that the rightness of our actions should speak for itself.  You believe in bullying, even as you claim to love the oppressed.

Funny how the evil and all-powerful patriarchy has seen fit to act according to SJW whims for all of recent memory, punishing those they hate and protecting those they love.  Funny how the evil oppressor males have to speak anonymously, while the SJWs fighting the power can use their real names and get mainstream media coverage for fun and profit.  How when a million straight while male nerds get bullied, no one cares, but the minute one fag hangs himself, suddenly bullying matters – and the solution, of course, is more bullying, but by the “right” people.

That’s the arrogant core of it.  You do the same evil, in the same pattern, as so many before you, because mob justice, punishing dissent, and repression of others is just fine and dandy so long as the “right” people are doing it to the “wrong” people.

Eat shit and die.  All I ever asked was to be left alone.

Lastly, a bonus for those who took the time to read the whole thing above: 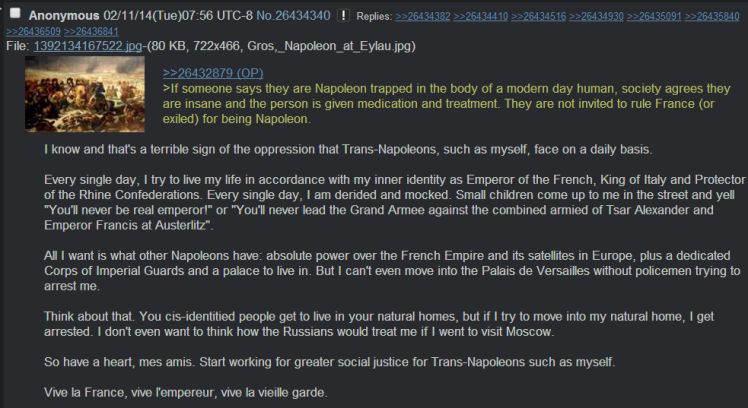