A brief treatise on how modern Social Justice Warriors share a lot of similarities to conspiracy theorists:

All the social justice movements have more in common with conspiracy theorists than they might want to believe.

Modern society has brought them to a point where they can no longer identify systemic discrimination as a force of oppression against them in the legal sense.  But life still isn’t good, and they feel different and ostracized! 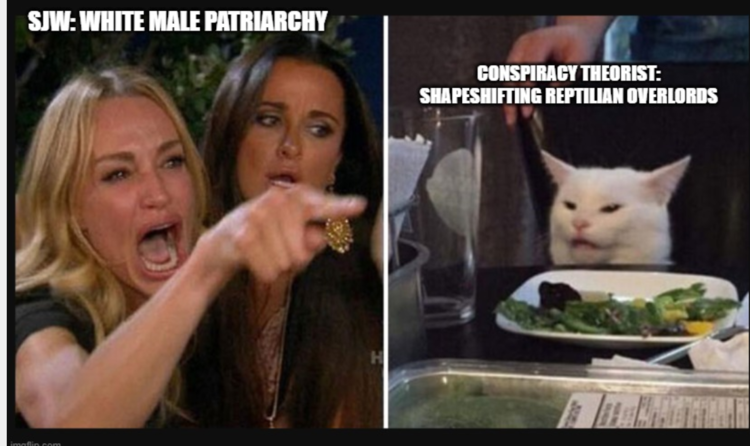 The problem must therefore lie in society as a whole, with some unseen force at the head of their woes.  Their Patriarchy is the Illuminati, the Zionist bankers, the Federal Reserve of tinfoil hat, Zeitgeist-level conspiracy theorists.

It’s similar to conspiracy theories in the sense that they search for hidden meanings everywhere, scraps that might be indicators of a greater plot against themselves, though these isolated incidents are examples of regular people have a bad day or being assholes, or statistics that have an otherwise reasonable explanation.

After being taught that the way to “justice” is through the intervention of the government, they crave to have minor perceived injustices against them remedied by law or manifested in a change of social behavior as a whole, when in reality they just marginalize themselves even more.

Just like conspiracy theorists, every dismissal of their theories then simply becomes an affirmation of a greater force trying to suppress their beliefs.  In the same way, their obsession is a self-fulfilling prophecy.

The above treatise is first found on 4chan written by an Anonymous.  One disturbing trend I notice is that while most conspiracy theorists are still mocked and largely powerless in modern society, SJWs have only grown in influence over the years.  There have been some push back against them as people tire of their antics, but it may very well be too little, too late.  Strange times are ahead.