One of the few occasions when the internet slang “clown world” is not an exaggeration:

Leslie Morgan White, 34, a morbidly obese man who has a history of heart problems called 911 last week after feeling intense pain in his chest.

White was brought to the St-Mathews Medical Center where he was immediately transferred to the Labor and Delivery unit and underwent anesthesia.

According to medical files, doctors attempted to perform a cesarean delivery on the 34-year-old man but eventually noticed he was not pregnant and had no uterus.

“I was crying and in pain and so they asked me if I wanted to go under anesthesia and I said yes, and so they gave me an epidural shot,” White told reporters.

“Didn’t anybody notice my genitals?” White asked, visibly angered by the whole affair. 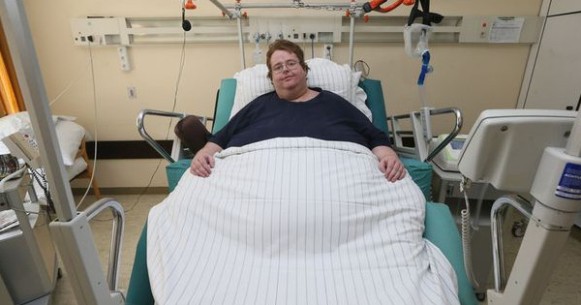 White claims it took at least half an hour after the C-section was performed until doctors asked him what he was doing there and finally diagnosed his chest pains as a heart attack.

“My client was under extreme pain and stress when he accepted the doctor’s proposition to have a C-section performed onto himself and could not comprehend what was happening to him at the time” White’s lawyer, James Collins told reporters.

In a similar lawsuit pending trial, doctors at St-Mathews Medical Center performed a liposuction on a pregnant woman in 2017 before noticing the woman was in fact in labor.

Only in America, can we have both the morbidly obese patient and the incompetent medical establishment required to accomplish the fiasco detailed above.

On a more serious note, this story also illustrates an important point.  Doctors are not infallible by any means, and it helps for one to remain vigilant and informed when dealing with them, and never hesitate to get a second opinion.  Here is a more horrifying story in a similar vein from my personal life:

Years ago my mother had a physical done in a hospital overseas, where the doctors there found signs of uterine cancer in her.  They gave her a very detailed report, printed on high quality coated paper with colored graphs and all the test results included, and emphasized to her that she should get herself treated once she returned to the U.S.  Obediently, my mother took that report to her primary care physician back the moment she returned to the U.S.

The physician, a family doctor, took a couple of seconds to flip through the 30+ page report, waved her hand magnanimously, and declared, “oh, you’re fine!”.

My mother walked away, thinking she was fine.  Several years down the road, she had another physical done at the same hospital overseas, and they found that the cancer has spread.  The cancerous growth that was originally a couple of millimeters in size, and would have been easy to treat, has now grown much larger.  The doctor there was furious at her inaction.

My mother immediately returned home, where this time around the U.S based doctor also acknowledged the signs of cancer, and referred my mother to a specialist.  My mother lived through her ordeal, but she had to go through radiation treatment and overall a lot more pain than if she had the cancer treated a few years earlier, when it was first found.

Everyone in the family still feels pretty upset toward Dr. “Oh, you’re fine!”.

Once again, this goes back to the initial point I made.  Doctors and the medical establishment can absolutely make mistakes, and if anything feels off, at least go get a second opinion.  Best of all, try to somewhat informed about your own health and medical issues that may affect you, to begin with.