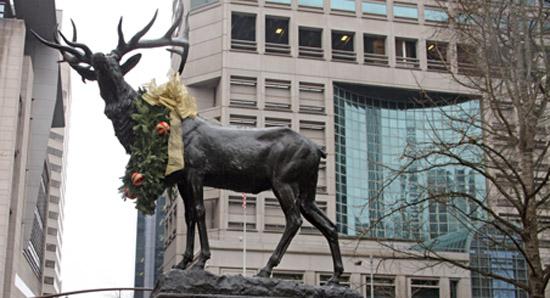 The Thompson Elk is an outdoor fountain along with a bronze statue of an elk, gifted to the city of Portland, Oregon back in 1900 by David P. Thompson.

The elk statue & fountain has stood for over a century in the city. Below is a simple summary of what has happened to the elk over the past summer’s civil unrests:

The one silver lining to the above situation is that the elk statue itself was unharmed after the vandalism and arson done to the base fountain, and has been removed for safekeeping in storage.

The violence that destroyed the fountain and forced the elk to be removed points to one aspect of society that has degenerated over time. The contrast between the old elk, which was what people considered as art back in 1900, and the new elk in all its ugly splendor, points to a different, more subtle sort of degeneration.

Western society, as a whole, is undergoing a transformation similar to what the site where the Thompson Elk stood has gone through. What the end result will ultimately look like is a bit too horrific to imagine.