A fairly brief essay by Beaver on the nature and use of propaganda in politics.  Comparing his ideals with what one can easily see in main stream media in the west is rather disheartening, however.

Propaganda is not merely a useful tool, but a necessity in a functional nation.

Propaganda has become a dark word associated with repression, disinformation and totalitarianism. In fact, our governments will use this as a tool: Enemy propaganda is presented as it is, propaganda. Neutral information is also called propaganda. However, the government’s propaganda will be given more pleasant names, such as “journalism” or “public service announcements”. In the end, they are all the same thing: Propaganda. Yet, the idea that propaganda is necessarily a bad thing is wrong.

As explained before, the leading of a nation is beyond the grasp of the common man, and not always through intellectual limitations but sometimes merely through motivation. An individual only has so much time in his day and depending on his situation, political activity may not be possible. The common man should not be expected to keep himself well informed on all political events; that is the duty of the politician.

However, for a nation to function, the aims of its citizens must be in line with those of the leadership, and this can only be achieved if the citizens have some knowledge of political issues. This is where propaganda comes in.

Good propaganda does not need to lie. In fact, it must be telling the truth: If the propaganda lies, the citizenship will find out sooner or later and their trust in their government will be severely undermined, which in turn will make all future propaganda ineffective. No, the aim of propaganda should not be to disinform the citizenship but to inform it. It is meant to break down complex political issues into an easy to understand and memorize format fit for the proletariat. Not the intelligentsia, but the proletariat. The more intelligent members of a society will be able to understand the basics of a political issue without the aid of propaganda and so it should not be targeted to them.

Furthermore, a government should have as few propaganda campaigns at once as possible. The more messages being sent to the populace, the less likely they are to remember any of it.

In the end, if propaganda is done well, not only will it allow better management of the nation as the citizenship will be better informed of the leadership’s intentions, but it will also increase general contentment as people will now understand the measures taken by their government. If it is not done well, it will sow distrust and greatly hinder the nation’s potential.

What is important to remember however is that the idea that propaganda is wrong is, itself, wrong. If our aim is to better our society and to build better nations, then we must learn to use propaganda properly. It is the only way to gain the people’s approval and thus their collaboration. And only once that is achieved can change finally happen. 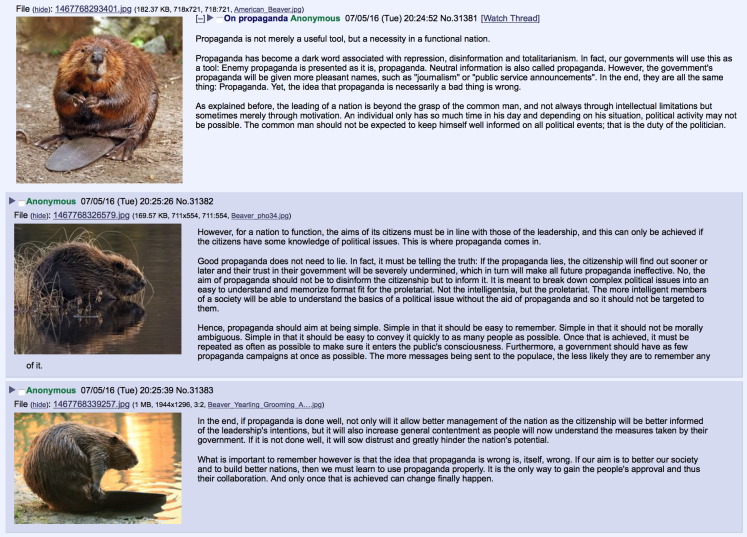 One thought on “Beaver Transcript: On Propaganda”