A while ago, the topic of tariffs were fairly big in the news, and despite other matters

taking attention away from it in the current news cycle, it is still an on-going matter in regards to the U.S and international trade.

Although belated, the below essay by Beaver help put the issue of international trade and tariffs in a more logical perspective, one other than “why would you be mean to our trade partners!?”:

Self-sufficiency is the key to a nation’s prosperity.

Any nation which cannot produce its own food and other resources required for basic needs is essentially nothing but a vassal state, entirely dependent on the whims of the nation providing it with goods. To understand this, I will explain what many consider a basic concept of economy, yet which bears repeating for this discussion. The economy is divided between three sectors:

1. Primary, which is production. This sector includes farms, mines, the lumber industry, oil wells, etc. Basically, any activity which extracts resources and makes them available.

2. Secondary, which is transformation. This sector concerns itself with taking the resources and creating things with them. This is manufacturing, construction, food processing, etc. It is entirely dependent on the primary sector to function.

3. Tertiary, which is service. This sector concerns pretty much everything else, from selling to transport to healthcare to entertainment. Though not entirely, it is still extremely dependent on both the primary and secondary sectors. The tertiary sector is different from the two previous ones in that it does not actually produce any wealth. At best, it transfers wealth from one entity to the other.

Now that we’ve established this, we can explore how self-sufficiency is crucial to any nation.

The first one only has the tertiary sector. These nations actually exist, they rely entirely on tourism for subsistence. As they do not produce anything themselves, they must buy the things they need from other nations; however, they cannot do so without anything to provide in exchange, and so they rely on tourists from other nations coming to visit them and selling services to them. This allows them to obtain money, which they then exchange for the goods they need. The citizens of these nations are entirely at the mercy of the rest of the world however: Other nations may decide to raise their prices to take advantage of them, or tourism may stop, or a catastrophe in might mean that other nations aren’t even willing to sell to them. A nation whose economy revolves around the tertiary sector is thus at the mercy of the international economy.

The second one has both the secondary and tertiary sector. Many nations nowadays have taken this model, having stopped producing their own resources and instead importing them to transform them. Such an economy is less vulnerable as it is capable of producing its own goods, yet it still depends on other nations to provide it with the resources it needs.

The third one has both the primary and tertiary sector. It produces its own resources, sells them to client nations who transform them, then buys them back. Though it has some leeway against other nations (if the other nations try and swindle them through rising the prices of processed goods, as an example, it can just stop providing them with the resources they need in return), it is still dependent on other nations.

Only the fourth one is self-sufficient: The nation with a primary, a secondary and a tertiary sector. Such an economy does not fear embargoes, sanctions, taxes or catastrophes in other parts of the world as it does not depend on other nations to produce its resources and process them. Thus, any such nation cannot be bullied by others in any way except military.

We can then rightfully claim that the prosperity of a nation depends on its self-sufficiency. As seen, any nation not capable of producing its own resources and transforming them is dependent on the international economy in one way or another and thus at its mercy. However, in the last decades, we’ve seen the opposite; with urbanization, wealthy nations have abandoned either the primary or secondary sector, constantly placing more and more emphasis on the tertiary. The secondary sector has been almost entirely moved to less prosperous nations. Though the effect is avoidable for a while, it was inevitable: As the supposedly wealthy nations produced less and less wealth, they fell deeper and deeper into debt. Solutions have been proposed, yet what must be done remains obvious. Any nation which wishes to reverse this trend of increasingly greater dependence on the global economy must achieve these:

1. Restart the primary resource sector, food production in particular. Feeding your people is the most important objective one must meet, and as long as your nation is capable of feeding itself, you’re not going to feel most methods of economic warfare. Even if you cannot produce all the resources you need, everyone needs food and you can always trade food for fuel and materials.

2. Focus the secondary sector on processing local resources. This means your manufacturing sector is not dependent on the whims of the international economy. Only once you can process your resources yourself should you consider opening industries which process foreign resources.

3. Acquire “vassal states”. If a nation can become self-sufficient, it should then seek nations which cannot be and submit them. This is simple: Offer them what they need in exchange for their loyalty. One should focus on nations which can produce resources which are unavailable at home, thereby securing them. If the vassal state refuses to cooperate in the future, you can simply cut the flow of the resources they need and starve them.

So remember: Any man who speaks of replacing agriculture with industry and industry with tourism is not a friend to your nation. 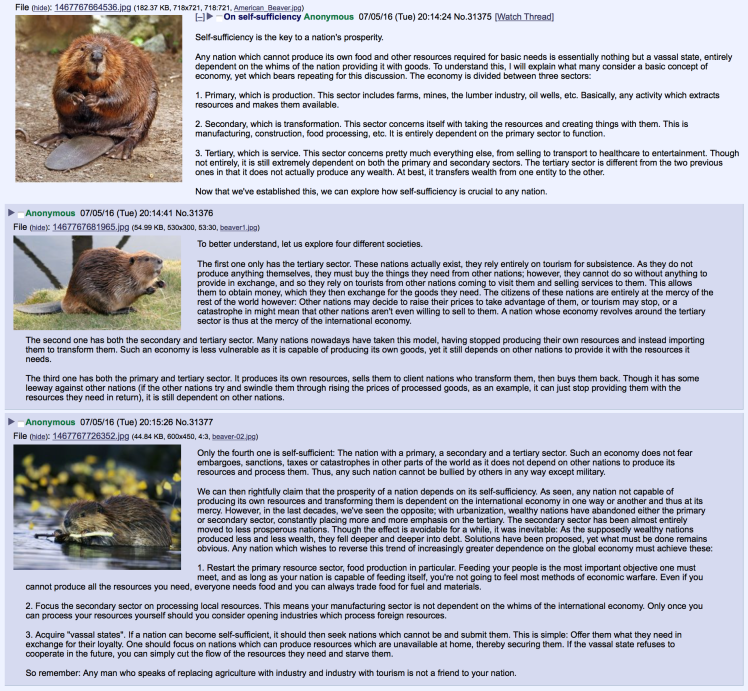