The following is a short essay by Beaver on the subject of free speech.  Free speech has turned into a very basic concept that people take for granted.  It’s spoken of in the manner of a slogan, but rarely really investigated as to why it’s important or what consists of free speech.  This essay provides a fine analysis on these topics.

Free speech is considered a basic requirement for freedom, for a modern, civilized society. I don’t need to explain why free speech is important, yet I will before i move on.

Free speech is considered a right because it implies freedom of thought. Furthermore, it empowers ordinary citizens by allowing them to denounce corrupt leaders and it protects them from abuse. Free speech leads to a better informed, better educated, and ultimately stronger society.

But what limits should be put on free speech? The seemingly obvious answer is none: How can you say you have free speech if there are things you can’t say?

Yet, anyone with an ounce of sense knows some things can objectively be very harmful to say. This is why we have slander and libel laws, as an example. You’re not allowed to spread lies about a person or organization. But then, if you’re not allowed to lie, what stops the powers that be from simply claiming that you are lying to shut down your right to free speech?

And that’s not all. In war times, crucial strategic information must be censored for the interest of the nation. Any information which is known to the public is information known to the enemy, thus it becomes necessary to restrict free speech. Yet, again, corrupt powers could abuse this to claim those who oppose them are helping the enemy to shut them down. We have quite a conundrum here. So, what constitutes acceptable free speech and what doesn’t?

Ergo, it is my belief that “free speech” should be abandoned as a concept, as it is self-defeating. Instead, it should be replaced by three more specific rights:

These three rights encompass everything which free speech aims to defend without the inconvenience of ambiguity which mere “free speech” offers. They provide the right to disagree with others and explain why you do, the right to question what you are told, and the right to dislike someone or something. Meanwhile, libel and slander are still disallowed while censoring critical strategic information remains moral.

The future ahead is difficult, it is important that we question how our rights work, or more specifically why we have them. In this way, we can better protect what is essential and prevent abuse. 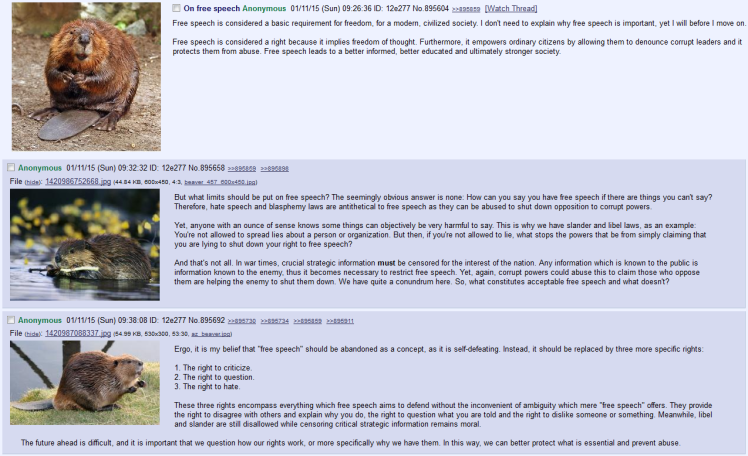