“What today’s moral guardians call “equal opportunity” is a disgusting corruption of the concept and this needs to be fixed.”

Yet another essay by Beaver, this time on the issue of equal opportunity and hiring quotas.  I imagine most young people who have done job searches or even just been in school in the last 5 years or so can notice some of the observations he’s made.

The meaning of “equal opportunity” is in the name of the concept itself: All individuals should be judged equally based on their abilities rather than on their race, gender, religion, nationality, sexual orientation or any other irrelevant factor. The aim of this is twofold:

1. Justice by allowing everyone an equal chance. 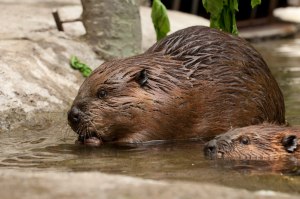 2. Efficiency by making sure we don’t ignore talented individuals based on arbitrary factors.

However, good intentioned morons have twisted this concept into an abomination which can best be described as “equal representation”.

You see, the concept of “equal opportunity” was originally intended as a method of fighting discrimination of all kinds. Of course, a wise man would point out that this is putting the cart before the bull: Ending discrimination should lead to equal opportunity, not the other way around. This has little relevance to the point I’m about to make, yet I felt the need to comment on it.

As the concept of equal opportunity was put in place, advocates for social justice observed a trend which alarmed them greatly: Despite their best efforts, many jobs were still mostly occupied by men and whites were overrepresented in many professions, especially high ranking ones. The explanation for this was rather obvious: Certain jobs require great physical strength and average women, whether we like it or not, do not possess the raw physical strength of average men. This is not a social construct, it is not discrimination, it is not a patriarchal invention, it is a biological fact.

As for racial representation, whether we subscribe to racial theory or not, one cannot deny that people of different cultures will have different affinities for certain jobs. People raised in a low income ghetto are naturally less inclined to higher studies than people raised in a cushy, high income home. In fact, culture even has an impact on gender representation: A culture which raises its daughters as housekeepers and its sons as providers will naturally see a difference in gender representation across professions.

Yet, the liberals were blind to this. To them, the difference in representation was not due to these factors but rather to a failure to apply equal representation resulting from residual discrimination. Their response to this was a perversion.

This is how we wound up with quotas, with affirmative action, with progressive stacks. The aim of these methods was to combat the supposed residual discrimination existing within societies. Better yet, we can observe cognitive dissonance as the same people who invented these also admit the truth of my previous statements, namely that biology and culture will naturally affect the representation of different groups in certain domains. From this we observed the rise of the concept of “innate privilege”, which was a proper way of saying whites and males should be discriminated against because they have higher odds of coming from a background which promotes intellectual pursuits.

And so we’re back where we started, with individuals being discriminated against based on arbitrary factors. This time, however, the moral guardians are satisfied because they see a fairly equal representation in certain well paying careers, failing to realize that this goes entirely against the original point of equal opportunity: Equal chances for all and efficiency in selecting able individuals.

But how do we fight this? With nothing more than the truth. We point out how whites and males from “underprivileged” backgrounds are getting discriminated against as much as those from supposedly “privileged” backgrounds. We explain why lowering the standards for access to a profession in order to meet quotas is a dangerous practice. We point out the real reasons behind the differences in representation. We denounce the patronizing belief that women and minorities need an advantage to succeed. We demonize the idea that some people should be selected against by mere virtue of their birth.

At the same time, we try and propose solutions to the problem of representation. Greater promotion of intellectual pursuits in low income communities, financial support for talented individuals from low income backgrounds regardless of race or gender, learning to educate our daughters to practice rational rather than emotional thinking. All of these would go a long way towards fixing representation without affecting equal opportunity.

We will meet opposition when trying to achieve this, but fret not; we are the majority. They are the minority. The people who think like us are overwhelmingly numerous compared to those who brandish the scarecrow of discrimination when we question their methods. It is time to speak, to stop pretending that we are a few individuals who still see the truth and realize that we are part of a silent majority. Once this is done, they will bend and our society will be free from their idiocy. 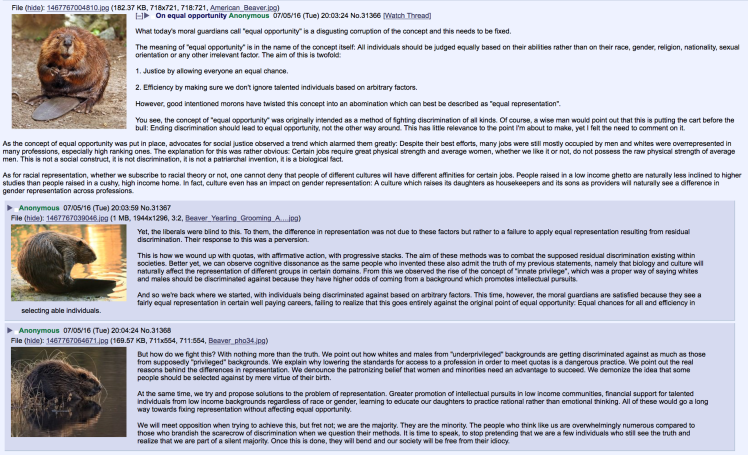