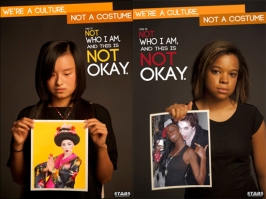 This is a screen capture of a conversation that occurred between a SJW and a Japanese person on the topic of cultural appropriation.  A general explanation of “cultural appropriation” is that it’s the adoption or use of the elements of one culture by members of another culture, something often complained about by the modern SJW crowd.  To the left is a brief example of such complaints.

It’s a funny coincidence both the SJW example I used and the conversation I listed above feature an Asian person’s reaction to a picture to someone in a Geisha outfit, but with such different response.

I’ve lived in parts of Asia extensively due to business and family reasons.  One interesting thing I notice is that Asian people who grew up in their home countries doesn’t care if someone else is using their culture as part of their media or entertainment.  For the most part they’re amused when it happens.  They also find other people’s interest in their culture flattering.  Asian kids who are born and raised in the US often end up sensitive to interests of this nature.  A Chinese kid born and raised in China will happily tell you about Kung Fu if asked, and yet Chinese kid raised in the US will most likely be offended by the same question.  It feels to me that the US educational system itself encourages victimhood, and makes the kids much more easily offended.