The Asiatic black bear, also known as the moon bear, is a black bear found in Korea, parts of India, China, Japan, the island of Taiwan, and probably one or two other places.  It’s a small sized black bear averaging around 300 pounds as adults.  They have a very distinctive V shaped patch of white fur on their chest, which is also responsible for giving them the nick name of the Moon Bear.

Below is a story from one of the aboriginal tribes from the island of Taiwan on how the bear got to have a weird patch of white fur on his chest.  I can’t find an English version of the story so I figured I’d write it up here for your enjoyment.

To talk about the bear, we must first talk about the leopard (the Formosan clouded leopard, to be exact), which lived in the same forests as the bears do on the island.  Long ago the leopard was an ugly little thing.  He had pure yellow fur that managed to look both boring and stick out like a sore thumb at the same time.  It was widely agreed upon by the animals and spirits of the forest that he was one of the ugliest creatures around, and subsequently he was very ashamed of his appearance.

The bear, on the other hand, had beautiful pure white fur back then.  His fur was snow white and shined magnificently under the sun light.  Everyone adored him wherever he went.  As a result the bear was confident and lived a pretty happy life.  Why is it that the wise animals of the forest deemed one pure colored critter to be ugly beyond redemption, and another to be wonderfully elegant, we will never know.

One day the leopard and the bear bumped into one another.  The leopard expressed admiration toward the bear’s lovely looks, and the two sat down for a chat.

The leopard looked sadly to the bear, and he implored, “Brother, I’m ugly and live my days in misery.  Isn’t there anything I can do to make myself beautiful like you?  Please help me.”

The bear peered at the leopard curiously.  He furrowed his brow and thought long and hard about the leopard’s troubles.  Finally he came up with an idea.  He responded kindly to the leopard in a deep voice, “Brother, I know what to do.  Lay down and have yourself a good nap.  I guarantee you by the time you wake up you will be beautiful.”

The leopard couldn’t believe his ears.  He laid down immediately and fell into a deep slumber.  During this time, the bear picked up a tiny branch off of the forest’s floor, and dipped it into the deepest black mud.  He then painstakingly drew all sorts of intricate patterns and complicated markings on the leopard’s fur.

When the leopard woke up, he looked hesitantly into a nearby lake at his reflection, and saw that he was indeed beautiful. He looked like this: 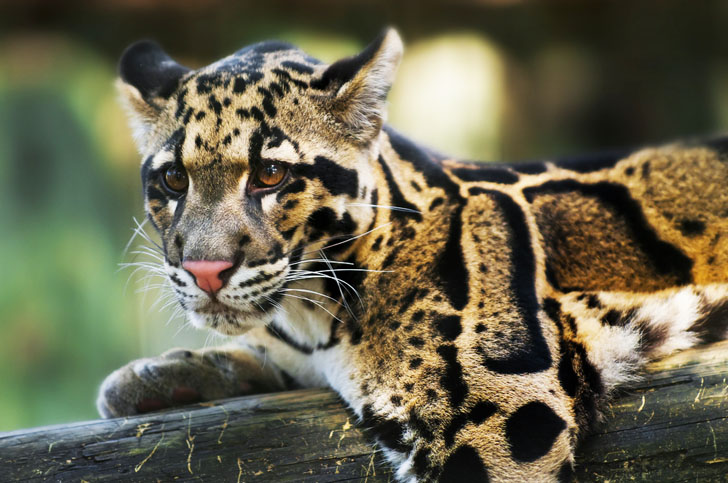 The leopard was ecstatic.  He thanked the bear over and over again.  “Brother!  Thank you!” he cried.  “How could I possibly repay you?” he asked.  The bear grinned and shook his meaty paws, “Oh, no need, no need!”

But the leopard insisted, “There must be something I can do!”  He then beamed happily, “Oh I know!  Bear, please lay down and have a long sleep for yourself too.  I’ll make you even more beautiful just the way you have done for me!  Go ahead, don’t be shy!”

The bear thought about this and he figured, why not.  He did do a good job on the leopard’s fur and was happily admiring his own handiwork and enjoying the praises coming from the leopard.  He boomed, “As you say, let’s do it!”

The bear then laid down, crossed his arms tightly and also fell into a deep slumber.  The leopard picked up a tiny branch off of the forest’s floor, and just like the bear, he dipped it into the dark black mud in the forest and began his work.

Sadly, unlike the bear, the leopard had no artistic talent or ability whatsoever.  The intricate markings on his own fur that curved and changed so gracefully, that the bear drew with such seeming ease over the course of a short time, were impossible to duplicate on his own.  he would try to draw something, maybe a curve, maybe a spiral, and only to have it come out crooked, like the wavy reflections off of water’s surface.  Very soon, the leopard has given up in frustration.

At this point he lost control of himself and threw a temper tantrum just like a child.  Maybe he was just a child, who knows.  He threw the branch he was painting with away, and plunged his own paws into the mud.  He then giddily slathered the black mud all over the bear’s beautiful white fur, covering every part he can lay his hands on.  The only part spared from this treatment was the bear’s chest, where his arms was crossed over.

When the bear woke up he giddily walked up to the lake while the leopard fidgeted nervously.  “What’s this, eh?” the bear asked incredulously upon seeing his own reflection.  He is now black from head to toe, his prized white fur gone except for an awkward V shaped patch on his chest. 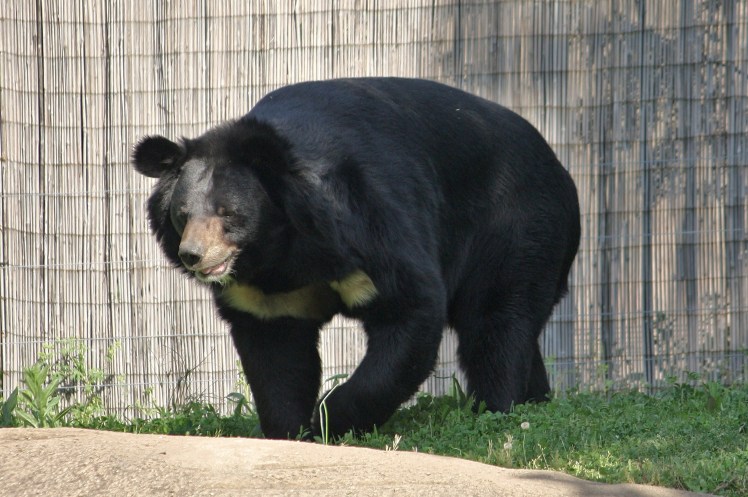 The leopard volunteered anxiously, “Wait, wait!  I can explain!”  The bear roared back, “No need, no need!”  He approached the leopard and swung his giant meaty claws at him.

“Please, stop!  No… no!” the leopard screamed.  Unfortunately the bear was enraged beyond reasoning and did not want to listen.  The leopard fled pathetically with the bear in pursue, and eventually he climbed up a tree where the bear could not follow.  “I’ll get you for this!” the bear bellowed below.

From that day forth, the leopard was beautiful and the bear the blackened appearance we know him for today.  The bear and leopard also became mortal enemies, and would attack each other whenever the two would meet in the wild.

In the wild, black bears do not get along with leopards, tigers and other miscellaneous large cats.  They are known to attack each other.

Luckily for the black bears on the island of Taiwan, and not so luckily for us, the Formosan clouded leopard is now extinct.  The last confirmed sighting of the leopard dates back in the late 80s, when the skin of a young individual (not a live specimen, just the skin) was found in a national park.  Maybe the bear had the last laugh after all.  How sad it must be to live as the last of your kind, to wander alone in the forest never seeing another familiar face.  The Asiatic black bear is still around, but considered a vulnerable species.